A Therapist In The Reclining Chair 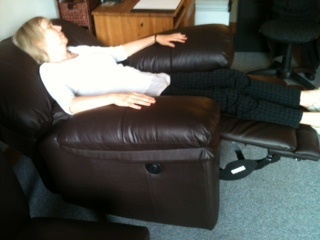 A Therapist In The Reclining Chair

I’ve been a therapist since 2006 and just before I did my initial training and again around 2007/8 and in 2014, I booked in for treatment. As therapists, we’re all bound by our code of ethics, and our own sense of what feels right, to respect our clients’ confidentiality. The client isn’t bound in that way at all so I have a huge sense of freedom to say what I want to say, share my own story and paint a detailed picture of what LCH treatment gave to me.

Never wanting to speak up, I stayed silent at school and hardly ever asked a question at university, in a lecture or a seminar. That was in the 1950’s to 1970’s. I joined a drama group in the 1980’s to see if I could get over my inhibitions because…

I just knew I could achieve more and
I’d have loads more fun if I could just speak up a bit more.

With a love of music, I took piano lessons as a teenager in 1960’s and guitar lessons as a 30-something in the 1980’s. I did fairly well, apparently, but never had the confidence to play for anyone except the passive and reluctant audience of my immediate family and neighbours who might suffer my hours of practice drifting through the walls. I never memorised anything or improvised or played anything by ear, so hardly played a note on either instrument over the intervening decades.

Hardly surprising then, that when I got chance to get my hands on a piano keyboard in December 2014, I wondered if I’d be able to remember anything at all.

Within a few months, I’d learnt a few simple pieces. I even managed to memorise them too. It seemed like it was time to move from playing just a few hours at the weekend to buying my own piano. It arrived at the end of April 2015.

I started to have more fun

One Friday evening, in the middle of June, I played two short pieces, from  memory, at an ‘open-mike’  night in front of about 30 or so other people with a huge range of experience and ability and sharing a wish to ‘have a go’ and encourage others to do the same. I enjoyed it so much that I felt a slight sense of disappointment that they ran out of time before some of us had chance to play our third piece.

Also, in the last few years, I’ve developed some public-speaking skills and spoken in various settings on a wide range of subjects at formal and informal events to audiences numbering from just a handful to over a hundred people.

So for about 50 years or so, I was the quiet, shy, nervous, reserved one.

For the last 5 years or so, I’ve been puzzlingly keen to stand up and speak and play and dance.

Can someone’s personality change so much at such an age?

Surely we develop to be who we are in our childhood, teens and twenties, and then just adjust a little at the margin after that. The only explanation I can come up with is that the therapy helped my subconscious mind clear away a load of clutter that had been getting in my way.

The treatment I had was for a variety of symptoms, conditions and issues, some physical and some psychological. The only one that was even vaguely connected to my self-confidence was to do with some sort of self-sabotage, something preventing me from achieving success.

As a Lesserian™ Curative Hypnotherapist, I know that the treatment is designed to get right to the roots and thoroughly resolve the cause of what’s bothering us. I had a lot of weeds in my mental and physical garden, and now that so many of them have been dug up and disposed of, there’s room for trees, shrubs, plants, flowers, fruit and vegetables to grow strong and healthy. I can work and play. I can speak and listen.  I can help my clients gain benefits and I can spread the word to others.

So I don’t know what kind of client I am, but I know that I enjoyed the experience – and the results just keep on making me smile.

One Response to “A Therapist In The Reclining Chair”

All content and opinions belong to the stated author.

No copying or distributing is permitted without prior written consent.

Images are supplied by the author named in the article and are the responsibility of that named individual only.